Yes, I know Christmas still haven’t arrived and Chinese New Year is still a month away! But being Chinese, we all know a high level of kiasu-ness is needed to secure a table for the family reunion meal in local restaurants. It’s common for Chinese eateries to be fully booked for the first 2 days of Chinese New Year MONTHS in advance!

In the spirit of sharing the sgvegan love and promoting Chinese vegan food, Eight Treasures Vegetarian restaurant generously invited some fellow sgvegan instagrammers, including myself, for a 8 course Chinese New Year menu tasting. Instead of ending with the usual Chinese desserts, boss Zenna presented a spread of handmade, rustic Western desserts from Well Dressed Salad Bar (which is the sister cafe). Thanks to her, we had the best of both worlds! Here are all that we stuffed ourselves with.

Also known as raw fish salad, a staple at every Singaporean Chinese New Year table. The fun part is the mixing, which is done by everyone together at the table with chopsticks while saying prosperous phrases. The fish in the vegan version makes use of starch from konjac (a.k.a konnyaku), a root plant, which gives the chewy, springy texture similar to raw fish. My favourite part was the how the fresh veggie + fruit shreds and crisp crackers soaked up the refreshingly tangy, sweet plum sauce. A very appetizing start to a huge meal.

Shark’s fin is an absolutely terrible ingredient, and I strongly believe that it should be banned. The vegan version uses either a type of gourd or vermicelli to emulate the smooth silky threads. Strips of beancurd and sliced shiitake are also added for bite and chewiness in this smooth, hearty soup. Vinegar and pepper is a must, but add only after tasting the soup on its own to gauge if it is truly good or not. With such a good vegan alternative to a traditional but cruel dish, there’s no reason we should consume shark’s fin at all.

Another staple in Southern Chinese feasts because yam and roundness both represent prosperity in Chinese beliefs. Cubes of mixed fruits and tossed in vegan mayo, stuffed into a ring of crisp and spiced yam, sitting on a bed of deep fried rice noodles. Personally I prefer the traditional yam rings – filled with stir fried mixed veggies and mushrooms, because mixing sweet and savoury flavours isn’t always my cup of tea. This is an interesting Westernized interpretation that will appeal to children especially. 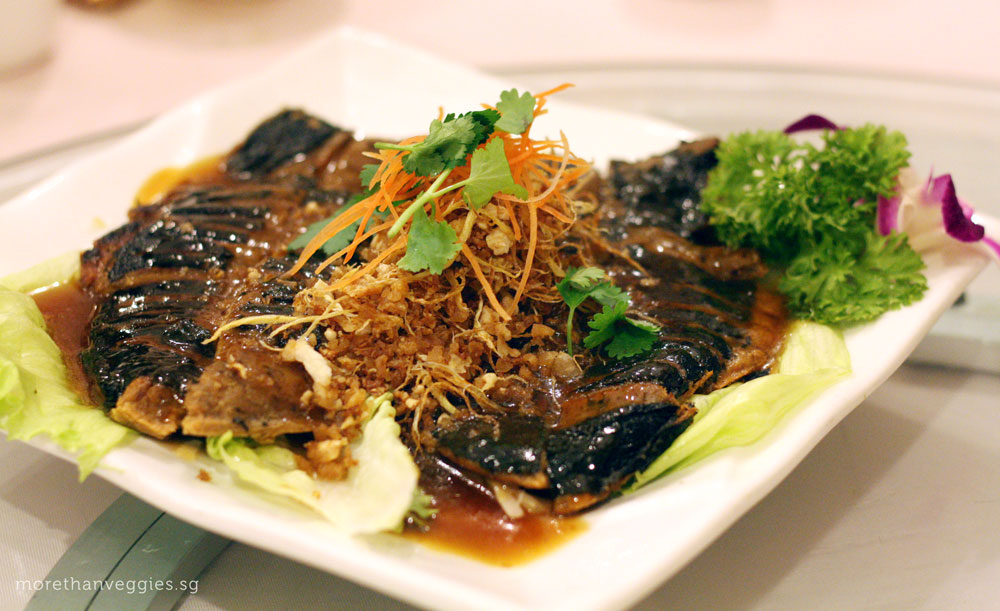 Fried soy seaweed slices sitting in a mushroom-y sauce, topped with umami pickeld radish and fried ginger. Usually Chinese mock meats don’t taste great, but this was good! The slices had a nice crisp bite on the outside, soaking up the sauce well and thus moist inside. None of the dry, over-flavoured MSG aftertaste of regular mock meats. The crisp ginger topping were an absolute delight, rich fragrance without the overwhelming spiciness.

Us Chinese, are very literal and money-loving. Deep fried foods are very common in Chinese New Year dishes as the golden-brown chunks symbolize gold nuggets and wealth. These konjac prawns were crisp outside, soft and springy inside. The vegan mayo added an umami tangy sweetness, balancing out the oiliness of this deep fried dish.

Because of the similarity in tenderness and juiciness, Bai ling mushrooms (a.k.a abalone mushrooms) are the vegan answer to abalone – which is another overpriced seafood placed on tables to show off the hosts’ wealth. Personally I’m very critical of the overall Chinese culture of showing off, placing too much emphasis on money and face value – some traditions are unnecessary and even harmful in the big picture of modern times. Here, I love the fact that they didn’t label it as mock abalone like other vegetarian restaurants will. Mushrooms are mushrooms, they aren’t pretending to be seafood!

Monkeyhead mushrooms (a.k.a lion’s mane mushrooms) are widely used in Chinese meatless cuisine. The juicy meatiness is something that will appeal to the hardcore carnivores. Here, the chunks are tender and excellently infused with a strong black pepper sauce. Do take note that many vegetarian restaurants use processed monkeyhead mushrooms that contain egg, however Eight Treasures’ one is pure vegan!

Fried silken tofu drenched in Chinese olive sauce. Umami rich with spinach and shimeji mushrooms for texture. The perfect companion to plain rice or noodles. Note that Chinese olives are not the same thing as Western olives used in pizza!

A Chinese meal is never complete without a good serving of carbs! A lightly braised and moist wheat noodle dish that cleansed our palette after the savoury and heavier dishes. Topped with seaweed and roasted peanuts, this will go well with all the sauce heavy dishes. So if you’re not feeling like having rice, get this instead!

The savoury dishes were good, the desserts were absolutely amazing! Zenna of Well Dressed Salad Bar have been wowing the vegan community with beautiful creations since the start of this year. They are all Western style sweets that are tuned to Asian taste buds (just the right sweetness!). For those who say vegans can’t eat desserts, sorry, you gotta eat your words!

A flaky crust with a tart plum filling with the sweet and sour flavours perfectly balanced. Look at how the glazing glistens without any use of egg whites! 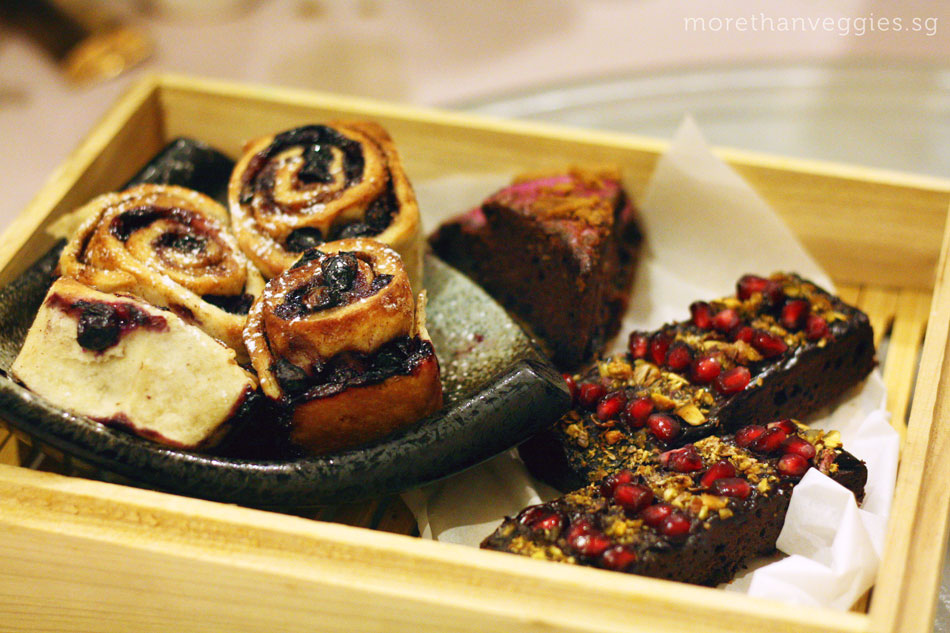 The cinnamon rolls literally melt in your mouth, the bistoffee cake had a lovely caramel flavour. The brownie was my favourite, fudgy and rich chocolate flavour with bites of pomegranate and nutty bits.

The smooth chocolate with a hint of hazelnut and tart frozen berries melts on your tongue. This captured the best of brownies, pies and berries in one dessert! Zenna certainly didn’t hold back on the amount of chocolate or quality of chocolate, and that should be the way! 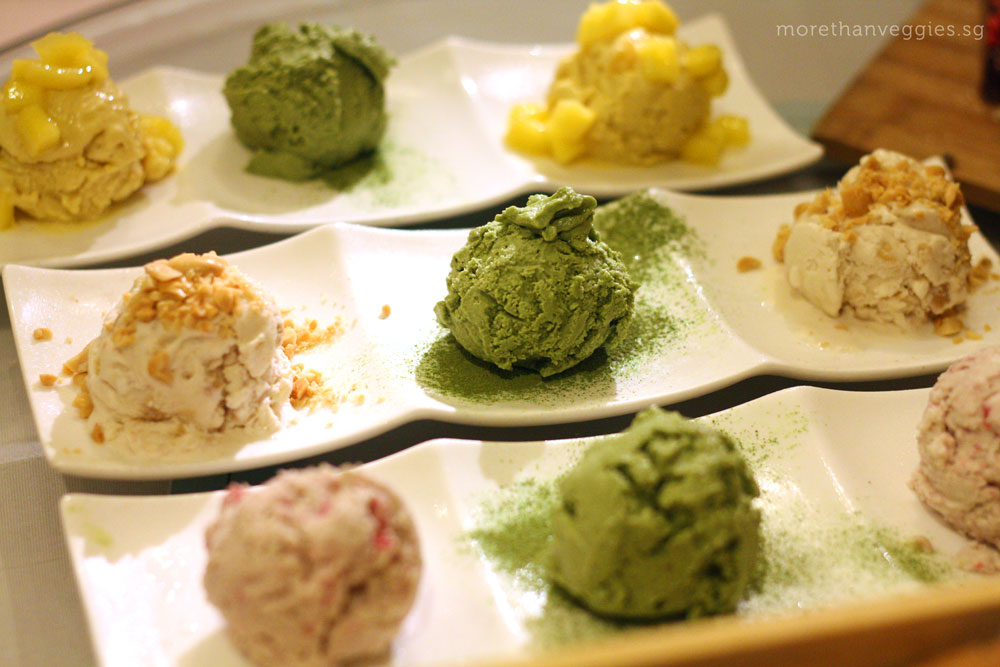 Every one of the handmade cashew-based ice creams were absolutely delicious. Creamy, rich and not icy at all unlike most people’s perception of vegan ice creams. My favourite is the matcha, high quality matcha was certainly used as there was no strong bitterness.

I can type more paragraphs about how great everything here was (especially the mind-blowing desserts!), but all I can say is, go down and try it for yourself! Bookings for 2017 Chinese New Year is already open at Eight Treasures. Do follow Well Dressed for and Eight Treasures for updates on events and desserts available. Well Dressed is located just below Eight Treasures and you can order food from both!